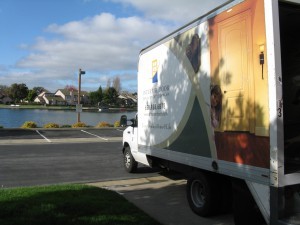 As with most parts of the Bay Area, Foster City is one of those built-out areas where there is no available real estate to build new homes. Most of the existing homes were built in the 1970’s, and there are few opportunities to own a new home if you want to live in Foster City. So the best option for local homeowners is to upgrade their existing homes. That was the case for this Foster City home we worked on today.  This was a beautiful home on property facing some open water in a park-like setting.  New paint, new furniture, and a number of other upgrades were in the plan, but the homeowner decided to start with the doors first. 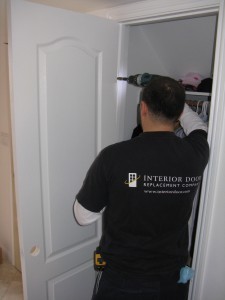 Within an hour of our arrival we had replaced 10 of the interior doors with new hollow-core doors manufactured by Jeld-wen. The last door was a fire-rated door, which was a bit more work to install. Our crew had to re-mortise the hinges and create a new opening for the deadbolt. The owner remarked that the previous door had had a gap on the bottom which allowed for a little bit of a draft to come in from the garage. We assured him that the new door would fit perfectly, with no gap and no draft. And sure enough, after the door was in place he could all see that there was a perfectly fitting threshold in place which eliminated the gap and prevented any potential for a draft.

The old doors were the original doors that were installed when the house was built in 1977.   Although they were in relatively good shape, they just looked plain.  I have included a photo of them for comparison purposes, as well as the new doors that we replaced them with.  You can somewhat see the transformation between the new and the old in these photos, but trust me–the change is far more dramatic when you see the new vs. old doors in person.  The transformation was so dramatic that it shocked the homeowner.

Throughout our visit, the homeowner and his wife continually raved about the professionalism and workmanship demonstrated by our crew. As we finished up, they remarked that the new doors looked so good that they wished they had included several other doors in the project, including the front entry door and several other specialty interior doors.  This is a common remark we receive from first-time customers who are not initially familiar with IDRC, and it was an easy request to take care of–we simply made a note to have Brian (the IDRC sales rep) to come out and provide an estimate for the remaining doors.